What's Up With GUCCI?

"The Gucci Women is all about sex" Tom Ford

As we all know, understand, and imagine; Gucci sells sex. Since 1994 when Tom Ford took over Gucci the company had one clear message "SEX!" It was the sexual revolution of women lead by Tom Ford who's dream was to empower women on a sexual level. This combined with his opinion that sex sells Gucci rose out of what seemed certain bankruptcy to one of the most popular and successful luxury fashion retailers. The concept worked and through controversial and provocative ad campaign Tom Ford ensured his clear message was embedded in the minds of the consumer.

In 2004 Tom Ford left Gucci but since then the company has continued to portray the same message of sex, and sales remained stable even after the mastermind behind it all left.

Examples of typical Gucci ads are as followed.... 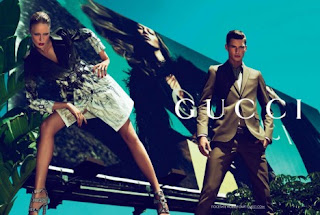 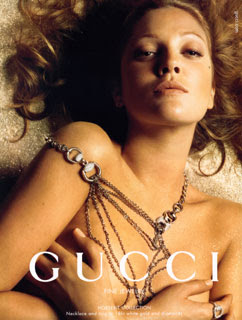 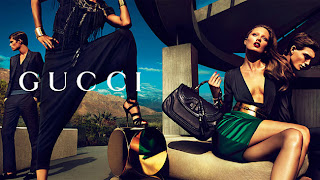 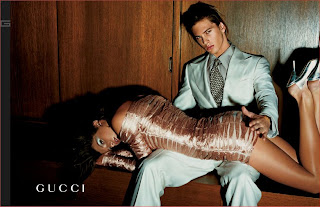 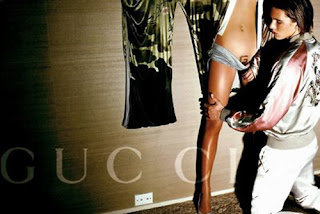 As can be seen, very sexually driven and in some cases provocative such as the last one where the Gucci G has been shaven in the girls pubic region!
Now, new creative director Frida has seen that the "new" trend of experience and heritage is replacing bling in a lot of sectors including luxury retail. Her idea is to bring back some of the old icons which made the old Gucci, like the horses and the bamboo. This in itself is not a bad idea, as long as the brand DNA would remain untouched and Gucci would remain true to its archetype; seduction!! It seems Frida has been able to do this for the clothing line... but to my horror I stumbled upon their recent add campaign "Gucci Forever Now" :-( The campaign was for their 90th anniversary and the excuse Frida used to comply with the heritage and experience aspect of the brand. Yet the visuals used clashed in every way with the image of Gucci in the mind of the consumer. 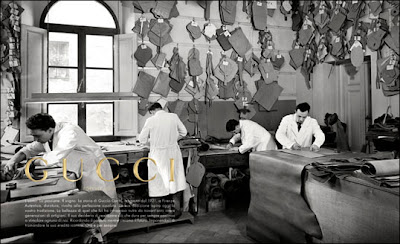 This in most cases is not what the perception most luxury consumers have in their minds when thinking of Gucci. Besides that the Gold Text of Gucci is nearly illegible on the black and white background. Imagine your a fan of Gucci and are a loyal customer, (if you actually are its even easier ;-) ) you are flicking through a magazine and you see this picture, different things could happen... First you are on the lookout for sexy ads so skip this one before you had a chance to see its Gucci, second you see its Gucci but you don't believe it or think its an editorial or something third you are annoyed your trusted brand is being so old fashioned.

Another thing I had with some of the visuals is that they seem more like the images of nike's sweatshops then that of a luxury brands work shop... 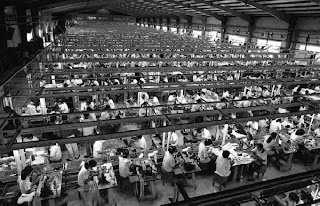 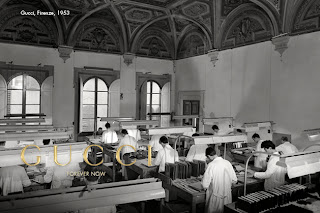 For me, not only could these pictures have been taking in the same place, (the top a sweatshop in asia, the bottom a gucci ad) Gucci is even less legible... It is for me amazing how a brand like Gucci can stray so far from their identity...
Thankfully this ad campaign seems for now to be a blimp rather than a downwards spiralling roller coaster. The new perfume ad of Gucci reassured me the brand hasn't lost all of its vision.
Negativity isn't my favourite thing, but this ad campaign just really bugged me ;-), so i needed to make sure my opinion was heard! Next time I promise something more positive, but who doesn't like a littile bit of gossip!!! ;-)
Till Next Time
Posted by Constantijn at 8:22 AM